Let's talk about the fuel tanks

Let's talk about the fuel tanks

I'd like to start a conversation about the tank situation of the Vega. As with many other things, I have very conflicting data on the subject and I hope you can help shedding some light onto the subject.

As you know, at the moment our Vega is equipped with two 48 gal tanks in the wing, bringing the total capacity to 96 gallons, which is in accordance with the old

As I understand it there were maaaaany different fuel tank options to choose from back in the day. For those of you who had a look at the type certificate atc 384 know that class III included an additional 48 gal center tank, which probably was located in the center section of the wing, just behind the pilot's head. Another option were two wingtip tanks of another 44 gal each.
Then, of course, there were the additional fuel tanks that pioneers like Wiley Post, Amelia Earhart or Jimmy Mattern installed in the fuselage. I don't have the specs handy for those tanks, but they might be in "Revolution in the sky" - I'll check that later.

The point of this post is the following:
I feel that the current tank configuration is not the best representation for the Vega and I'm thinking of going for a three-tank solution. The tank selector shown in the current version is modeled after the tank selectors of the Winnie Mae. And to me it looks as if Wiley Post had the three-tank option installed - two ~40-50gal tanks in the wing and another 40-50 gal tank in the center section of the wing. That also means that the middle position of the fuel tank selector would be the center tank, rather than the "both" setting that it is right now. I always felt that there's something off about "both" - it makes fuel management too easy

What fuel tank layout you think would be the best representation for the Vega 5C?

For any option, it would be just good to enable 1 extra attachment to be added in the cfg file. I believe this could satisfy most of flyers. Maximum number of tanks that I could find was 6.
Top

I'm still utterly confused about this.

Where on earth is the filler neck for the third fuel tank?

I went through all my reference pictures and drawings and I cannot find an image of a Vega with three filler necks - there's always just two on the top of the wing. Furthermore: Where could that third filler be? The hatch would completely cover it when fully opened.

What I did find however is pictures of Detroit Vegas (the metal ones) where you can see three fuel tank vents. This also explains why the hatch of the DL1 in flying condition opens sideways instead of to the back.I couldn't find an image of the top of the wing though, so no idea how the filler neck might look like.

For the first Vegas we know that they were delivered with a two-tank configuration of ~50 gallons each, as indicated by a brochure by Lockheed.

But to make things more difficult, most ordinary Vegas don't seem to have been delivered with proper fuel gauges. That's at least my conclusion after looking again at the cockpit pictures of the Henry Ford museum (when the images were still available for download). I assume that they had inspection glasses in the back though...

As you pointed out, Amelia's Vega had three fuel gauges on the dash, pointing to a three wing-tank configuration. For her flights, she used a single ~500 gallon fuselage tank and I believe Post used the same, single tank. This however might only be true for ONE of her Vegas - remember that she flew more than just the NR-965-Y.

Post had two fuel gauges on the dash, reading a maximum of "10" - presumably gallons?! At best those would be tanks number 4 & 5 in the wingtip, but they still seem uselessly tiny, adding less than an hour on the range. In the wing would be the three ~48 gallon tanks and in the fuselage the one ~500 gallon tank.
This is at least what I came up with when trying to make sense of his fuel selectors in correlation of what Allen wrote in "Revolution in the Sky": 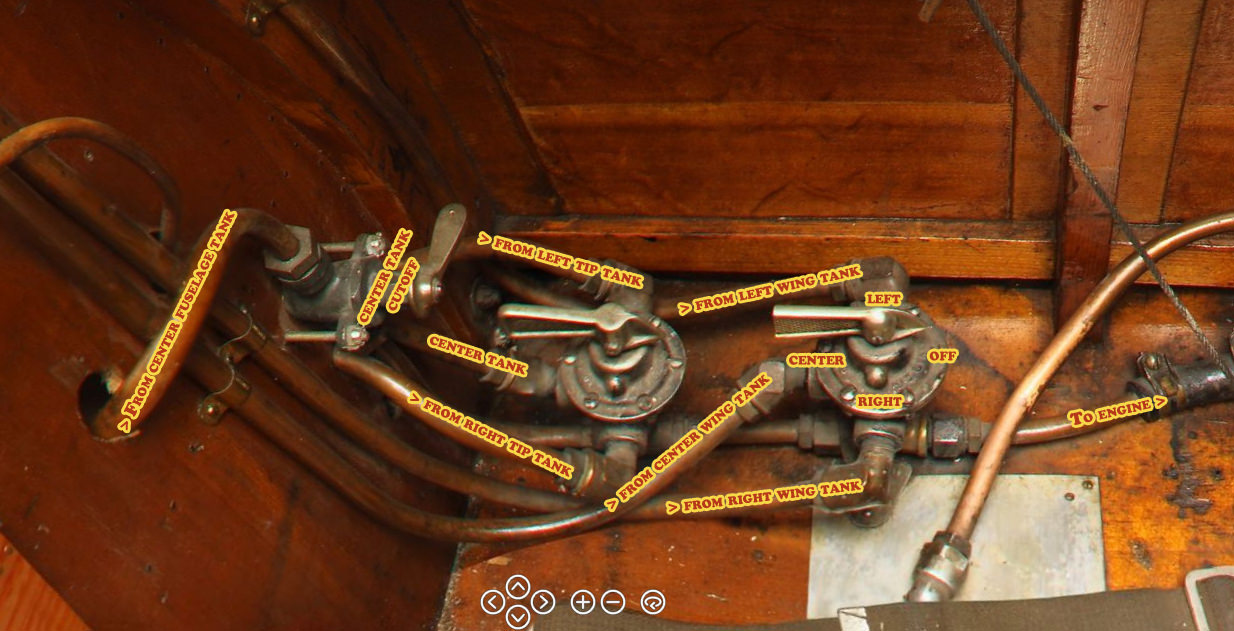 If someone could please point out to me how the center wing-tank was filled, then I could get a good night sleep for a change

Here is the picture of DL-1 with 3 tank configuration:

All tanks have same width - they slightly differ in height (see Kermit Weeks movie), with filler located in the middle, so it looking at 3-tank wing, we can guess location of no. 4 and 5 fillers. looks like center one is slightly moved to the back.

Just my guess but 10 could mean 100%, not gallons. These gauges were calibrated - there is mark "for lockheed" on the dial. All tanks had ~50 gal. of capacity, giving total of 200 for 5 tank system.

Looks like I missed 1 more line - if winnie had 3 wing tanks (Kevin's statement), then there were 7 lines in total. Your mark for "from center fuselage tank" is on bypass line on the left valve, and it is not selectable. So they added separate cutoff valve for it. Looks like selectable line marked "Center tank" goes just to another tank. But where is the filling cap - a mystery - maybe under some cover (?)
Top

That picture is find, thank you. But it also shows how the hatch of the DL-1 opens sideways, so there's no problem with the filler neck. But if you have the sliding type hatch, this position wouldn't be accessible.

Yes, maybe under a cover... Check out this picture of the Winnie Mae: 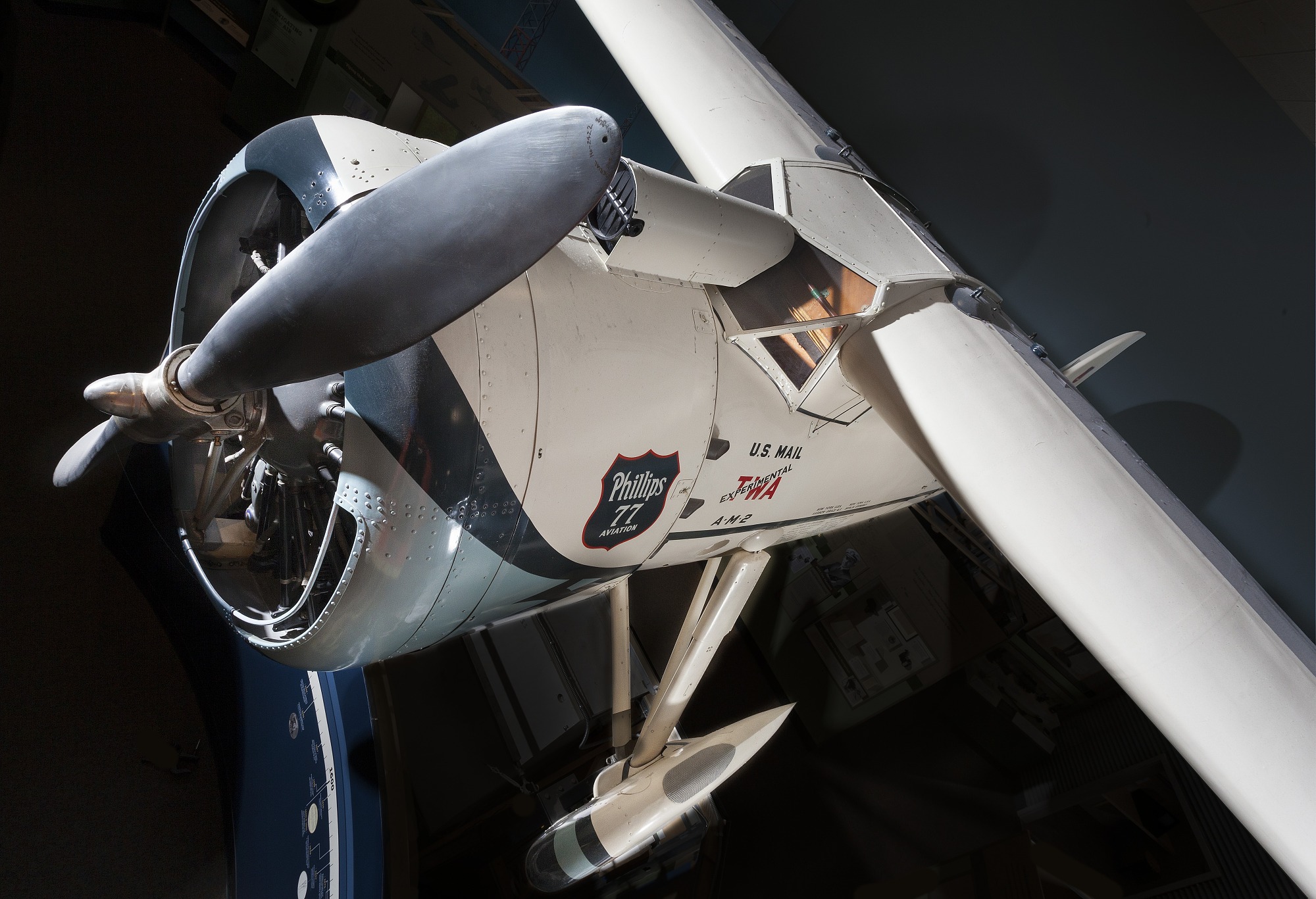 if you zoom in, you can see a round panel right where the tank filler could be located. But as I said - if you open the hatch, you can't reach that panel making refueling a bit complicated. Most Vega-refueling-pictures I have, show someone standing up on the pilot's seat, hatch open. This way there's no extra ladder needed.

Another option of course would be that one of the filler necks is connected to two tanks and the panel is just a maintenance access point to service the tank.

But if it was the access panel to the filler neck, it begs the question why they didn't bother to streamline the other two tanks as well by sinking the filler necks into the wing?

As to the Winnie Mae's configuration: I take all the information with a grain of salt and I don't trust those definitive statements by Kermit's team.
Here's a different option: 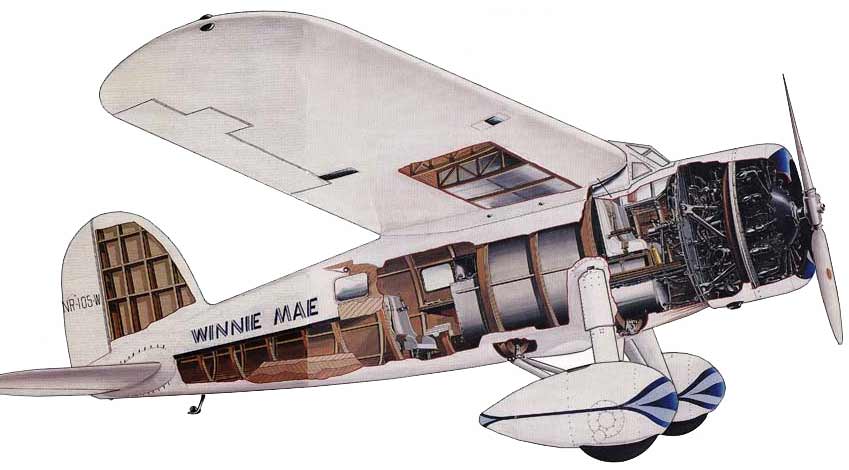 One fuselage tank, and two tanks in the right wing, separated by a wing rib. Bringing it up to 5 wing tanks and the fuselage tank.

These are two different setups of Winnie Mae. Smithsonian's has the latest setup, after stratosphere flight - with 4 internal tanks, as could be seen on "her last journey" movie.
Setup on the graphics is different one - from"around the world" flight of W. Post/ H. Gatty. It has similar setup like Lituanica II with total capacity of 690gals (from certificate). There are at least 4 wig tanks, possibly with 5th one (unconfirmed in sources - we don't see it on the graphics, but there is no proof that it wasn't there).
Filling center tank could be bit problematic, but nothing prohibits to climb on the wing, then close a hatch and fill this tank from there. Then when done, you can open it again.
5 tank version could be seen here (source: Smithsonian's) 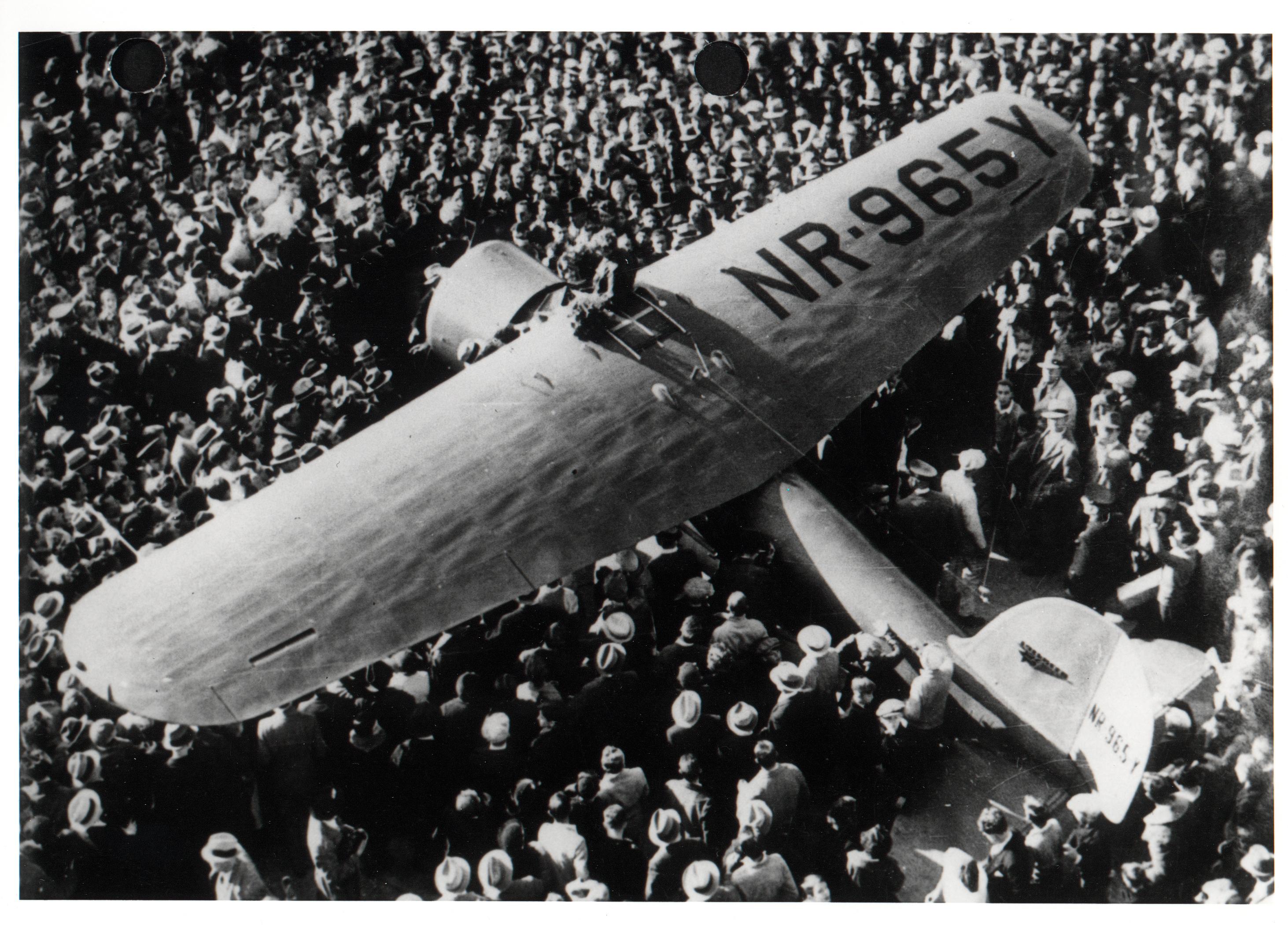 Her first Vega was NC-7952, and from this certificate we can extract some interesting information.
This was plane with 2 wing tanks. Certificate states:

The following items shall be considered when computing the gross load:
Gasoline at 6lbs, fuel oil 7 lbs, Lubricating oil 7.5 lbs. per gal.
Passengers and crew at 170lbs. each.
Equipment not standard
Baggage and cargo at actual weight.

With maximum fuel of 96 gals, maximum pay load is 859 lbs.
Maximum pay load with minimum fuel of 63 gals. is 1057 lbs.
At no time will more than 7 persons (including crew), be carried
Baggage compartments- maximum capacity is limited to 145 lbs.
Top
Post Reply
7 posts • Page 1 of 1